On Friday 15 March 2019, an Australian-born white supremacist entered two mosques in Christchurch, New Zealand and massacred 51 Muslims peacefully conducting their sacred Friday prayers. One year after the Christchurch attacks, Muslim writers in Australia and around the world have confronted such heinous crimes with the most powerful tool at their disposal: the pen. In this urgent public dialogue, some of our greatest writers discuss the role that literature plays in defeating the rise of white supremacy, Islamophobia and xenophobia within modern western societies. Journalist and editor of the 7am podcast Osman Faruqi speaks with New Zealand Greens MP and author of Know Your Place Golriz Ghahraman, journalist and author of the critically acclaimed book White Tears/Brown Scars Ruby Hamad, award-winning author of The Tribe and The Lebs Michael Mohammed Ahmad, and writer and Sweatshop Women contributor Naima Ibrahim.

Golriz Ghahraman made history as the first refugee to be sworn in as a member of New Zealand’s parliament in 2017. Iranian-born, Golriz arrived in New Zealand with her parents seeking asylum as a nine-year-old. She studied human rights law at Oxford and has practised as a lawyer in New Zealand and for United Nations tribunals in Africa, The Hague and Cambodia. Her work has included trials of leaders for genocide and war crimes, restoring communities after war and human rights atrocities, particularly empowering women engaged in peace and justice initiatives. Golriz is a member of New Zealand’s Green Party.

Michael Mohammed Ahmad is the Founding Director of Sweatshop: Western Sydney Literacy Movement. His debut novel The Tribe won the 2015 Sydney Morning Herald Best Young Novelists of the Year Award. His latest novel The Lebs received the 2019 Premier’s Multicultural Literary Award and was a finalist for the 2019 Miles Franklin Literary Award. Michael completed his doctorate at Western Sydney University in 2017.

Ruby Hamad is an author, journalist and former Fairfax Media columnist. Her work has appeared in The Guardian, Prospect Magazine, Meanjin, The Saturday Paper and more. She is a PhD candidate in media and postcolonial studies at the University of New South Wales. She was a contributor to Arab, Australian, Other. White Tears/Brown Scars is her first book. 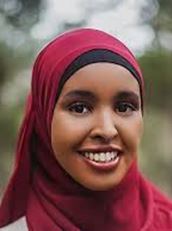 Naima Ibrahim is a Sydney-based fiction writer. She has a degree in Education from Charles Sturt University. Naima was the winner of the 2019 Zinewest Writing Awards. She was also shortlisted for the 2018 Monash Prize in Creative Writing and longlisted for the 2019 Liminal Fiction Prize. Her work has appeared in Sweatshop Women: Volume One, This Little Red Thing and ZineWest '19.

Osman Faruqi is the editor of 7am, Schwartz Media’s daily news podcast. He was previously the deputy editor of ABC Life and an award-winning reporter with the ABC’s flagship audio documentary program, Background Briefing. He presents on The Mix, the ABC’s arts and culture TV program, and was formerly Junkee Media’s news and politics editor. He has judged the Walkley Awards and the NSW Premier’s Literary Awards and sat on the Board of FBi Radio. He’s currently writing a book about race relations in Australia, due out in 2021.

The Art of the Story