Story Club Junior: It Was a Dark and Stormy Night...

Zoe Norton Lodge has worked with the Chaser team on ABC TV shows including The Hamster Wheel, The Chaser’s Media Circus and The Chaser’s Election Desk, and she was a writer and presenter on The Checkout for six years. Zoe is co-creator of Story Club, and has written approximately 4 million short stories. Zoe’s writing is widely published in Australian anthologies, including Best Australian Stories. Her first book of short stories was Almost Sincerely. The first two titles in her new middle grade series Elizabella Meets Her Match, and Elizabella and the Great Tuckshop Takeover are out now.

Jeremy Lachlan was born and raised in Griffith, country NSW, but now calls Sydney home. His debut novel, Jane Doe and the Cradle of All Worlds, was a 2019 Australian Book Industry Award winner, and he once took home $100 in a karaoke competition, of which he's equally proud. His second novel, Jane Doe and the Key of All Souls was released in January, 2020.

Ben Jenkins is a writer, TV producer and the co-creator of Story Club. His written work has appeared in places like The Guardian, The Sydney Morning Herald and anthologies like The Best Australian Comedy Writing and People of Letters. On TV, he has written for The Chaser, The Checkout, Tonightly, The Feed and various other ABC and SBS ventures. He also has a Dungeon and Dragons podcast called Dragon Friends and a baby son not called that.

Rhiannon Williams is a Sydney-based writer. She studied Creative Arts at university, has climbed Mt Kilimanjaro, and once accidentally set fire to her hair on stage. Her Ampersand Prize-winning debut novel, Ottilie Colter and the Narroway Hunt, was published in 2018 and was named a CBCA Notable Book, an Aurealis Awards finalist, and shortlisted for the Readings Children's Book Prize and the Speech Pathology Australia book awards. The third Ottilie volume Ottilie Colter and the Withering World is due out May 2020.

Deb's adventures in Africa, where she was harassed by monkeys and thrown in jail twice, inspired her to write books about spies, soccer, WW2, pesky wolves and kids in flying machines who battle sea-monsters and evil harbour lords. Her love of words led to The Stupendously Spectacular Spelling Bee and The Most Marvellous Spelling Bee Mystery and her crankiness about climate change led to Grimsdon, New City and Final Storm. She's won awards for her books, but mostly hopes to be as brave as her characters. 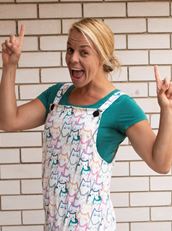 Nat Amoore is a Sydney-based author, book-lover, professional tree-climber and all-round bucket of fun. Her debut novel Secrets Of A Schoolyard Millionaire came out in 2019 with Penguin Random House, and was Australia's #1 bestselling debut Aussie children’s fiction in 2019. Her second book The Power of Positive Pranking was released in 2020, with two more books set for 2021. Nat is also a host of KidLit podcast, One More Page which has over 50K downloads and was a finalist in the ‘Best Newcomer’ category for the 2018 Australian Podcast Awards.

A History of Everything in 15 Objects

Of Myths and Magic