Yanis Varoufakis: The Economics of Liberty

After entering politics during the Greek financial crisis in 2015, Yanis Varoufakis quickly became one of the most relevant and radical political figures of our times. The former Greek finance minister and self-described ‘libertarian Marxist’ is globally recognised for his progressive politics and divisive opinions on democracy, liberty and capitalism – and his excoriating attacks on the international economic establishment.

In 2016, Yanis took on the growing far-right movement in Europe by co-founding the Democracy in Europe Movement 2025 (DiEM25). The pan-European cross-border group offers “European solutions to European problems” from debt to poverty, and tackles toxic nationalism and xenophobia. The group was elected into Greek parliament in July 2019.

At City Recital Hall, the bestselling author (And the Weak Suffer What They Must?, Talking to My Daughter) and rock-star economist shares his forward-thinking views on the challenges facing European democracy and the universal truths they tell about the state of global politics.

Don’t miss the incredibly charismatic Yanis as he joins George Megalogenis for an insightful – and provocative – discussion. 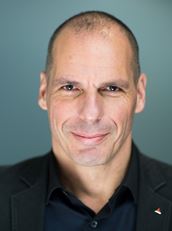 Yanis Varoufakis is the former finance minister of Greece and the author of a memoir, Adults in the Room, and a history, And the Weak Suffer What They Must?, which reveal and explain the catastrophic mishandling of Europe since the financial crisis. Both were number one bestsellers. His latest bestseller is Talking To My Daughter About the Economy: A Brief History of Capitalism. Born in Athens in 1961, Yanis Varoufakis was for many years a professor of economics in Britain, Australia and the USA before he entered government and is currently Professor of Economics at the University of Athens. Since resigning from Greece's finance ministry he has co-founded an international grassroots movement, DiEM25, campaigning for the revival of democracy in Europe and speaks to audiences of thousands worldwide.

George Megalogenis is an author and journalist with more than three decades' experience in the media. His book The Australian Moment won the 2013 Prime Minister's Literary Award for Non-fiction and the 2012 Walkley Award for Non-fiction, and formed the basis for his ABC documentary series Making Australia Great. George is also the author of Australia’s Second Chance, Balancing Act – Australia Between Recession and Renewal, The Longest Decade and Faultlines. His latest book is The Football Solution.