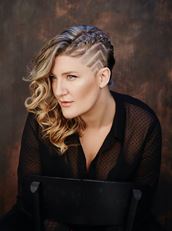 Unfortunately, Virginia Gay will no longer be appearing at the Festival.

Virginia Gay graduated from the Western Australian Academy of Performing Arts, then spent four years pretending to be a nurse on All Saints, six months pretending to be Julia Gillard in the Sydney Theatre Company’s Wharf Revue, and then five years on Winners & Losers, where she pretended to know a lot about high finance. That last one, particularly, was a stretch. She won a Sydney Theatre Award for Best Actress for Calamity Jane, starred in the film Judy & Punch, which premiered at Sundance 2019, and wrote and directed her first short film Paper Cut, which made 2018 Tropfest. She is currently writing a new play for Belvoir, which will premiere in 2021.

Virginia has been an apocalyptic squid in Eddie Perfect’s Vivid White, a prize bitch in The Beast, every stop on the bogan-to-hipster spectrum in On The Production Of Monsters, and Nancye Hayes’ granddaughter in Minnie and Liraz, all for Melbourne Theatre Company. She played pacifist, suffragist and feminist Vida Goldstein in The War That Changed Us (ABC), and a fast-talking 1930s photographer in High Society (Hayes Theatre Company). She had a sold-out season at the Opera House of Cautionary Tales for Children (Arena Theatre Company) and was Bea Miles, the iconic (and homeless) Sydney eccentric, in the immersive-theatre experience Hidden Sydney.

She has written two solo cabaret shows, Songs To Self-Destruct To and Dirty Pretty Songs, both of which sold out at the Adelaide Cabaret Festival, and which toured nationally and internationally, most notably headlining the Famous Spiegeltent at the 2012 Edinburgh Fringe. She makes regular appearances on The Book Club (ABC), CRAM (Channel 10), Adam Hills’ In Gordon Street Tonight (ABC), Good News Week (Channel 10), Studio at The Memo (Foxtel) and The Unbelievable Truth (Channel 7).